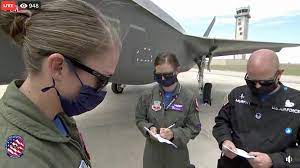 Another American has paid a price for not going along with the Covid mask mandates.

The Air Force suspended a highly trained fighter pilot because he wouldn’t wear a mask. This was after his commander denied him a religious accommodation request, as reported by Liberty Counsel.

In a June 10 letter to John P. Roth, acting secretary of the Air Force, Liberty Counsel appealed the denial of a religious exemption and the disciplinary actions against the unnamed pilot.

Roth announced in a memo on Feb. 16 that all Air Force personnel must wear masks, and stay at least six feet away from their fellow airmen.

The Air Force captain, called “John Doe,” determined that forced mask-wearing violates his religious convictions. Because it forces him to submit to a pseudo-scientific religion, now known as “Faucism.” In other words, having a religious-like belief in whatever Dr. Anthony Fauci says.

“Mandatory masking is seen by many as the cornerstone of a social narrative—an ‘orthodoxy’—that COVID-19 justifies unprecedented restrictions on individual, economic, and religious liberties. A mask mandate may offend the conscience of an objector, forcing him to confess ‘by act’ his faith in what he perceives as a false narrative.”

Recently released e-mails show that Dr. Fauci knew that mask mandates promote social control and create an illusion of safety. But mask wearing does not control the spread of respiratory illnesses.

Because this belief in masks was a false narrative, it violated this pilot’s Christian beliefs against going along with a lie. Liberty Counsel also wrote:

“Many Christians [like] Captain ‘Doe’ believe that support of a false narrative is participation in a lie, which is sin.”

Doe, stationed in Mississippi, first applied for a religious exemption on March 14, 2021. His group and squadron commanders approved the request.

To avoid a conflict with his commander, Doe took 30 days of leave while he appealed the wing commander’s decision. However, his appeals were denied.

The Air Force has suspended Doe from flight status, from access to classified information, and subjected him to non-judicial punishments.

And, the Air Force invested over $2 million to train Captain Doe to help protect our country. But now it seems willing to put political correctness ahead of civil liberties and military readiness.

Liberty Counsel also made this point in its press release:

“It is unfathomable that the military would spend time and money in training its personnel simply to suspend and punish them for unconstitutional reasons, in violation of their own policies,”

All military soldiers take an oath to support and defend the Constitution against all enemies, both foreign and domestic. This case raises the question: Besides acting secretary Roth, how many more enemies of our Constitution are in the military and government?