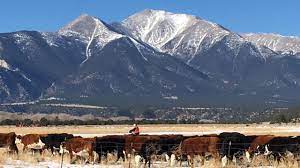 Finally, common sense from judges in a blue state.

On June 21, the Colorado Supreme Court ruled 7-0 that Initiative #16 could not proceed to the November 2022 ballot. The justices denied ballot access because it violated the one-subject rule. This means that each proposed ballot initiative must address only one subject.

Also known as the PAUSE Act, it would turn farmers, ranchers and veterinarians into criminals for raising beef cattle.

And it would ban the production and sale of beef cattle in the state of Colorado. That’s because it would outlaw common animal-husbandry practices.

The Colorado Farm Bureau responded to the court’s decision:

“Today’s Supreme Court ruling on Initiative 16 is not only a massive win for the agriculture industry but the entire state, as well. Initiative 16 was one of the most radical ballot initiatives this state has ever seen. Had it passed, it would have ended animal agriculture, rodeos, dog shows and much more.

“This sends a strong message to the supporters of this measure that multiple subjects and inflammatory language will not be accepted. The coalition will continue to monitor any new initiatives filed by the proponents of this measure. We are hopeful that these kinds of extreme initiatives stop here.”

So what’s the motivation behind this bad proposed law?

Some people have suspected it’s part of Bill Gates’ global agenda. Which would ban the production and consumption of meat, and force people to eat only plant-based proteins.

It’s another example of the cancel culture. Where liberals think it’s OK to try and “cancel” any idea, business or person they don’t like or agree with.

This ruling doesn’t mean that this bad idea is done for good. There’s still plenty of time for the folks behind the PAUSE Act to resubmit another initiative and start the process over.

However, it’s a win for meat-lovers, freedom and common sense. And we’ll take these wins wherever we can get them.