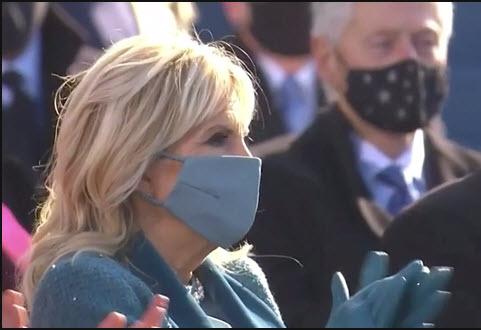 This is something MSNBC or CNN will never tell you – some inside dirt on the new regime.

We’re talking about Joe Biden, Kamala Harris, and surprisingly – Jill Biden – who apparently can get salty when another woman attacks her man.

Here’s one shocking example that shows us that everything inside the White House now is not all rainbows and lollipops.

Let’s not forget how nasty the Democratic primary race was back in 2020 and 2019. Kamala couldn’t even get a delegate and dropped out with one percent of the vote.

Before she left the race, let’s also not forget that Kamala was downright nasty with Joe in some of the debates.

According to Politico, things were extremely frosty between Kamala Harris and Jill Biden in 2019.

It started when Harris and Biden faced off in a Democrat presidential debate and highlighted his past position on bussing.

“As the only black person on this stage, I would like to speak on the issue of race. … So on the issue of race, I couldn’t agree more that this is an issue that is still not being talked about truthfully and honestly. I — there is not a black man I know, be he a relative, a friend or a coworker, who has not been the subject of some form of profiling or discrimination,” she said.

“Growing up, my sister and I had to deal with the neighbor who told us her parents couldn’t play with us because she — because we were black. And I will say also that — that, in this campaign, we have also heard — and I’m going to now direct this at Vice President Biden, I do not believe you are a racist, and I agree with you when you commit yourself to the importance of finding common ground,” Harris said.

“But I also believe, and it’s personal — and I was actually very — it was hurtful to hear you talk about the reputations of two United States senators who built their reputations and career on the segregation of race in this country. And it was not only that, but you also worked with them to oppose busing.

“And, you know, there was a little girl in California who was part of the second class to integrate her public schools, and she was bused to school every day. And that little girl was me,” she said.

Biden did not take kindly to the insinuation, as many thought, that he was a racist.

“It’s a mischaracterization of my position across the board. I did not praise racists. That is not true, number one. Number two, if we want to have this campaign litigated on who supports civil rights and whether I did or not, I’m happy to do that. I was a public defender. I didn’t become a prosecutor. I came out and I left a good law firm to become a public defender, when, in fact, my city was in flames because of the assassination of Dr. King, number one,” he said.

“Number two, as the vice president of the United States, I worked with a man who, in fact, we worked very hard to see to it we dealt with these issues in a major, major way. The fact is that, in terms of busing, the busing, I never — you would have been able to go to school the same exact way because it was a local decision made by your city council. That’s fine. That’s one of the things I argued for, that we should not be — we should be breaking down these lines. But so the bottom line here is, look, everything I have done in my career, I ran because of civil rights, I continue to think we have to make fundamental changes in civil rights, and those civil rights, by the way, include not just only African-Americans, but the LGBT community,” he said.

And during the commercial break Biden reportedly said to Pete Buttigieg, “Well, that was some f***ing bull****.”

But he was not close to as incensed as Jill Biden was, as she spoke on a call with supporters a week later.

“With what he cares about, what he fights for, what he’s committed to, you get up there and call him a racist without basis?” she said, several people on the call said, Politico reported. “Go f— yourself.”

Daaaaaang. Jill can turn on the thug life when she wants to. LOL

No wonder we never see those two talking and laughing with each other.

You still frosty with Kamala, Jill?