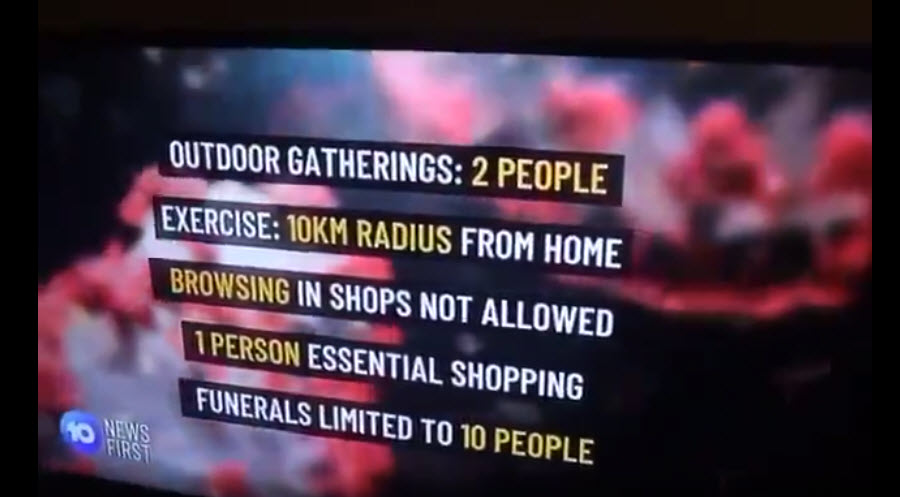 After hearing what this news reporter said on-air in Australia, you have to wonder if America didn’t get the memo on the New World Order.

Some of us could see it coming, but the term “new world order” might be new to you.

What’s the New World Order? Well, there’s a lot to unpack there. Too much for this article. If you haven’t heard the term, it generally represents a vision of world government shared by the super wealthy and the elite class.

Giving details about the new lockdowns, for the criminal scheme to defraud known as “COVID-19” Reporter Hart, like a good little Commie statist drone, outlined:

Exercise: Within 10km of home

One (1) Person per household, per day may engage in Essential Shopping (Food and supplies)

Watch as the newscaster says, “Today is the first day of the New World Order.”

Australia is able to do this nonsense to its citizens because it scammed those citizens out of weapons several years ago, with emotion-driven appeals after a single nutcase gunned down some people.  The masses never bothered to realize that once they were disarmed, their own government would do things like this.  Yet, here it is.

This is what happens to people who give up their God-given right to own weapons for self-defense.

It is also what happens when people fail to pay attention to actual facts, and instead drink the Kool-Aid of government propaganda about a disease that has a 99.8% survival rate.

It is a bit funny how this was broadcasted in Australia, where the global time clock begins. As the sun rose from Australia to India, Europe and then the Americas, this announcement is “going viral.”

Did the NWO kick off today? Or was this broadcaster being melodramatic?