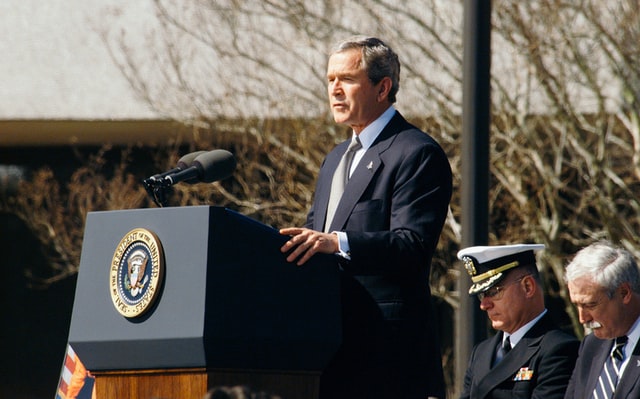 Here’s how they’re trying to pull the wool over Americans’ eyes:

If you think about this for a moment, you’ll realize this actually keeps migration numbers the same.

And by making illegal immigration legal, even more migrants would be attracted to America in the future.

The legal-ends-illegal claim “is completely absurd unless the position is that there should be unlimited immigration,” Rob Law, the director of regulatory affairs and policy for the Center for Immigration Studies, told Breitbart News on Tuesday.

“There’s no reasonable level of capped immigration that could be set that would satisfy all the [worldwide] demand” for U.S. jobs by would-be-migrants, he said.

This point is correct.

Bush’s plan lays the foundation for non-stop immigration into the U.S.

That could mean tens of millions of people, at least…

In March, Jim Clifton, the CEO of Gallup, warned that 42 million people in Latin America and the Caribbean want to migrate into the United States. He continued:

In addition to finding a solution for the thousands of migrants currently at the border, let’s include the bigger, harder question — what about all of those who would like to come? What is the message to them? What is the 10-year plan?

330 million U.S. citizens are wondering. So are 42 million Latin Americans.

And what about the effect this is going to have on current American citizens?

Bush doesn’t seem to care about that.

For example, the group touts the economic interests of the government, of investors, and CEOs — but not of wage earners or home buyers

And this is where so-called conservatives show their true liberal colors, allying with the Left against the American people.

Most members of the Bush group would be considered by the media as “right of center.” But they share the same cheap labor, pro-migration goals as the left-of-center amnesty groups funded by progressive billionaires, including Mark Zuckerberg and his investor allies at FWD.us.

The coalition members include many establishment advocacy groups, such as the Bipartisan Policy Center, the Koch-funded Americans for Prosperity, the National Association of Manufacturers,  the Business Roundtable, and Mike Bloomberg’s New American Economy group.

But the coalition also includes many groups that get funding from left-wing donors, such as Human Rights First, HIAS, the National Immigration Forum (NIF), the Southern Baptist Ethics & Religious Liberty Commission, and World Relief. For example, Zuckerberg funds the NIF.

They’re all on the same page when it comes to hurting America’s interests, and they’ll never put America First.