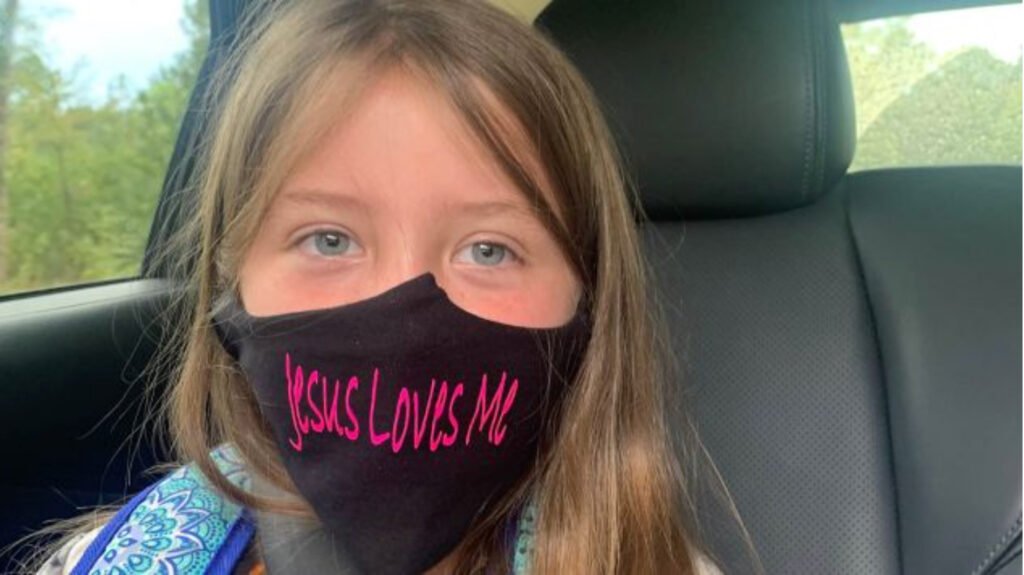 Imagine if your third-grade son or daughter wanted to wear a “Jesus loves me” face mask to school… and was told by an administrator to remove the mask and that he or she could no longer wear it.

This is exactly what happened to Lydia Booth in a rural area of Mississippi.

Now imagine how your child would feel in such a situation. Confused, humiliated, ashamed? And imagine how YOU would feel. Disappointed, angry, even livid?

To make matters worse, they allowed other students to wear Black Lives Matter face masks at this school… but a “Jesus Loves Me” face mask was, apparently, inappropriate. Caleb Parke reports:

Alliance Defending Freedom (ADF) is fighting for a third-grade girl’s right to wear a “Jesus Loves Me” face mask to public school.

The youngster was saddened on Oct. 13, when her principal at Simpson Central School pulled her aside and said she could no longer wear her “Jesus Loves Me” mask, which she’d worn several times.

Her mom, Jennifer Booth, was told the mask violated school policy because it had words on it, but Booth noticed it wasn’t in the policy. The superintendent then told her it violated their policy banning masks with political, religious, or inappropriate symbols.

The school allegedly changed its policy to justify the move and refused to accommodate Lydia, according to ADF.

“We were forced to file a lawsuit in order to just allow this third-grader to just express this positive message to the students around her that Jesus loves me,” Langhofer said.

If you are a Christian, it’s a good reminder of the truth of Jesus’ words in Matthew 10:22: “You will be hated by everyone because of My name.”

Let’s pray that Lydia is permitted to continue expressing her faith.