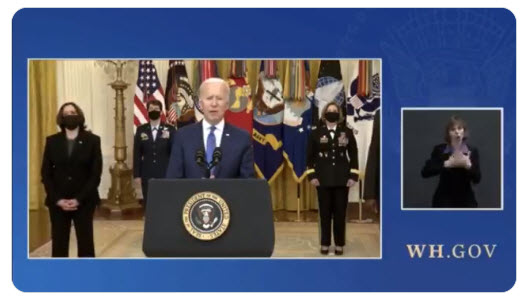 This is getting embarrassing for all Americans.

So today, the Prez had another senior moment while giving a talk on camera.

While speaking at a military recognition ceremony, Joe Biden completely blanks out on the name of his newly appointed Secretary of Defense, Lloyd Austin, and also cannot recall where Austin works–the Pentagon.

The talk was also weird because Biden seems to be prioritizing the dress code of our military over strengthening the nation’s defense and keeping Americans safe. Biden says his administration’s top priorities in the U.S. military will be tailoring uniforms and body armor so that it fits female soldiers better, as well as changing hairstyle requirements and then he rambles about something called “maternity flight suits.”

“Some of it’s relatively, uh, straightforward work,” Biden said. “We’re making good progress designing body armor that fits women properly, tailoring combat uniforms for women, creating maternity flight suits, updating their hairstyle requirements, and some of it is going to take an, uh, you know, an-an-an an intensity of purpose and mission to really change the culture and habits that cause to leave the military.”

This speech is bizarre. You can feel the awkwardness in that room.

When you type Biden into Twitter search one of the top suggested searches is “Biden dementia.” What does that tell you?

Americans are not stupid.

The news cycle seems to have reached a point where there is a daily gaffe from Biden being talked about online.

If Democrats want to keep Biden in office, they will continue to limit his public appearances as much as possible.

Will they go back to the “basement strategy” that was used for over 50 straight days last summer during the campaign, when they kept Biden at home and he only had two online interviews?

Let us know what you think in the comments.