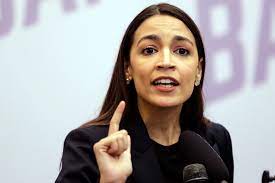 Newly-released government memos confirm what most of us have thought:

AOC lied about her trip to the Mexican border on July 1, 2019. She said that a Border Patrol agent tried to attack her at a processing center for illegal aliens in El Paso, Texas.

And like other lying liberals, she accused the agent of the behavior she was guilty of.

Here’s the scoop from the Daily Signal:

“An ‘agitated and animated’ Rep. Alexandria Ocasio-Cortez, D-N.Y., began ‘pointing and screaming’ at a female agent during a 2019 visit to a Border Patrol station in El Paso, Texas, according to government documents.

“Ocasio-Cortez said the Border Patrol agent—whose name is redacted in the U.S. Customs and Border Protection documents—used her cellphone to take a photograph of herself with the New York congresswoman in the background.

“(AOC) went on ‘to personally admonish and berate’ the agent and to insist that ‘that woman cannot work with children,’ according to CBP memos resulting from a Border Patrol investigation of the incident.”

Here’s what the accused agent had to say about Ms. Cortez:

“On July 1, 2019, I heard a loud banging on the window behind me while I was working inside the processing area. I turned around to this lady shaking her fingers at me, I was not sure why she was trying to attract my attention until Patrol Agent in Charge (PAIC) REDACTED came to me and told me that they were accusing me of taking ‘selfie shots’ of Congresswoman Ocasio-Cortez.

It’s too bad that AOC is like many folks on the Left. They don’t care about the truth or doing what’s right.

They only care about how they can use an event to advance their politics.

Let’s hope we see more truth come out, and expose these lying liberals.