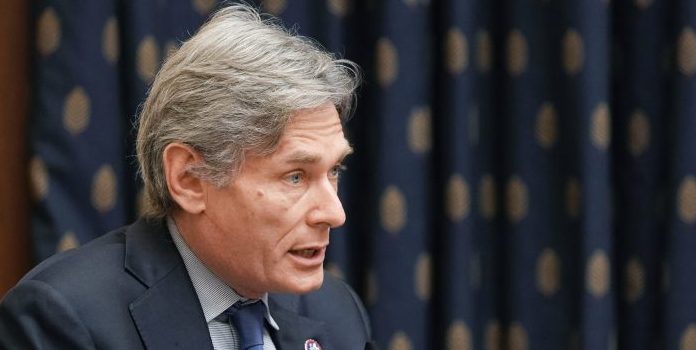 Liberals just can’t help themselves. So many times they warn against or accuse others about the same thing they’re doing.

Our latest episode of Projection Theater stars a Democratic Congressman from New Jersey, Tom Malinowski. In the early days of the pandemic, he scolded those who would profit from this disease. And it was “not the time for anybody to be profiting” from selling goods to combat the pandemic.

But it looks like Two-Faced Tom didn’t think this warning applied to him.

Records show that since early 2020, Malinowski either bought or sold as much as $1 million of stock in tech and medical companies that had a stake in the response to Covid-19. These trades were just a portion of up to $3.2 million in trades he didn’t properly disclose.

He either sold stocks right before they tanked, or bought stocks at rock-bottom prices after they dropped in value. This New Jersey Congressman / stock tycoon also engaged in short selling – where an investor makes money when stocks go down. It’s the process of “Sell high, buy low,” instead of buying a stock and hoping it goes up.

A former presidential advisor wonders why Malinowski made these unique trades. “It boggles my mind why he’s doing it,” said Richard Painter. He’s a University of Minnesota law professor who served as President George W. Bush’s ethics attorney.

There’s no evidence Malinowski acted on inside information – which is illegal for most investors. But as the old saying goes: “If it looks, walks and quacks like a duck, it’s a duck.” And no one makes trades with a seven figure account unless they know what they’re doing – or have a good idea if a stock will go up or down.

If you’re wondering: “Isn’t this type of trading illegal?” The answer is yes. Until 2012, Congress was exempt from insider trading laws. Until the Stock Act was passed, and supposed to prohibit this kind of hanky-panky.

This law forbids members from using inside information, and requires that all stock trades be reported to Congress within 45 days. But in the nearly 10 years since it was passed, no one has been prosecuted under it. Even though many members continue to conspicuously trade and appear to profit from insider information and trading.

The Congressman’s financial reporting has been less than transparent. It’s now May 2021, and mandatory reports to Congress detailing his trades have not been made public.

In an interview Thursday, Malinowski said his broker does not speak to the firm about specific transactions, and handles all of his trading decisions. His office provided a statement from the brokerage firm which said that it “made trades without Congressman Malinowski’s input or prior knowledge.”

Sorry, I can’t buy that line – even for a dollar.

It should be obvious that this is insider trading. But because he’s a Congressman, he won’t get prosecuted for it.

It’s yet another example of the two-tiered justice system in America today. One for the rich and powerful, and the other for “we the people.”