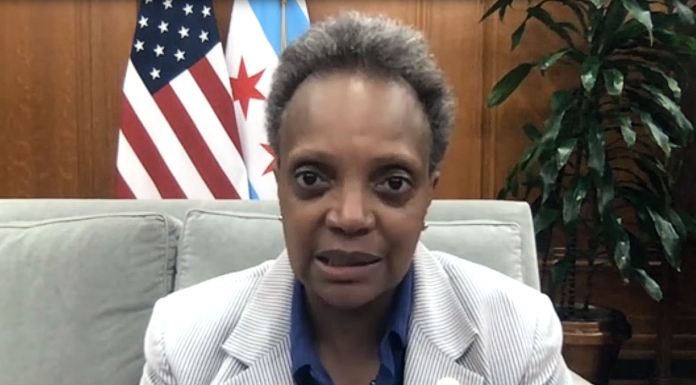 There’s a mental virus going around that’s more dangerous than the physical one known as Covid-19.

It’s infected a sizable part of liberal Americans’ thinking, and it defies common sense and reason. And it would be funny if it wasn’t so dangerous to our country and society.

It’s the “Woke” virus. Everyone it infects views all issues through the lenses of social and racial justice. And it’s just about taken over the thinking of most liberal, Democrat leaders.

And when you thought this type of thinking couldn’t get any crazier, Chicago Mayor Lori Lightfoot says: “Hold my soy latte.”

Multiple reporters confirmed that in the future, Ms. Lightfoot will only do interviews with “journalists of color.” No whites are allowed to talk with the Windy City mayor.

“As [Mayor Lightfoot] reaches her two year midway point as mayor, her spokeswoman says Lightfoot is granting 1 on 1 interviews – only to Black or Brown journalists”

Wait a minute. Isn’t this a type of racism that liberals (allegedly) were or are against?

It was Martin Luther King, Jr. who said: “I have a dream that my four little children will one day live in a nation where they will not be judged by the color of their skin, but by the content of their character.”

Although we elected a black president for two terms, race relations were worse at the end of Obama’s eight years than when he started. And now, liberals call people “racist” if they don’t agree with their politics. “Racism” and “racist” are used as political hammers to force people to accept or agree with the Left’s radical views.

Today, it seems that racism has gotten worse in America. But not because of what white Americans have done. Liberals of all colors have beat the racism drum over and over in the press and in politics.

Ms. Lightfoot has made this decision to try to pit people in Chicago against each other. It’s a tactic that’s been around for thousands of years: Divide and conquer. That’s the only way liberals can maintain power.

Most people in America have taken MLK’s words to heart. They judge folks on the content of their character instead of the color of their skin. “Racism” isn’t as big of a problem as the Left wants you and other Americans to believe.

While this story is disturbing, it’s also encouraging.

Liberals know they’re losing the intellectual battle of ideas. That’s why they have to resort to these tactics to advance their agenda.

Here’s what you can do on a daily basis to combat this liberal lunacy:

Work hard. Be friendly and respectful to others. And help your friends, family and neighbors whenever possible.

Annoy a liberal today. Live a happy and productive life.