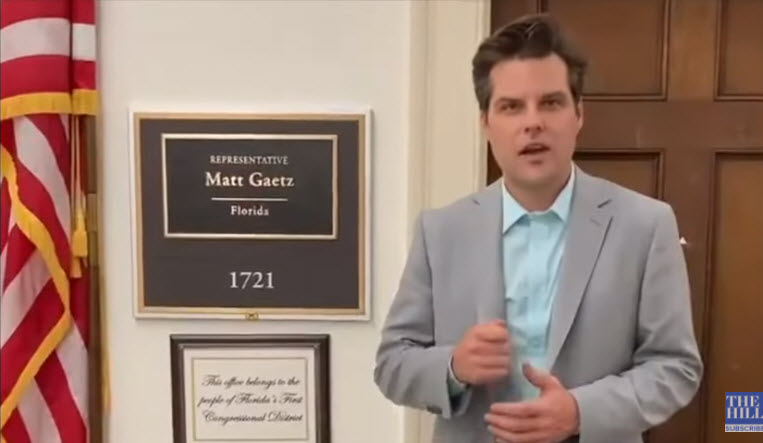 Politicians with a knack for avoiding political traps and overcoming whatever attacks get thrown at them are sometimes called “Teflon,” because “nothing sticks to them.”

Another term for this is ‘Untouchable.’

Rarely does a politician remain untouchable in American politics. They might for a season, but usually the teflon wears off and things begin to stick.

One young Republican who may turn out to be made of Teflon is Matt Gaetz.

The Florida Representative has been getting pummeled since Biden took office. After Trump left office, Gaetz has been one of the Democrat’s primary targets. The Dept. of Justice is throwing whatever they can at Gaetz to see what sticks, which was their strategy with Trump.

Four weeks into their partisan investigation, the DOJ has no evidence of wrongdoing by Gaetz. No accusers or witnesses, either – an intriguing fact that makes this theory plausible:

POLITICO’s Tara Palmeri has claimed that Rep. Matt Gaetz could be “politically untouchable” if he gets through the increasingly transparent partisan scandal he is currently in the fourth week of.

In a new POLITICO video, Palmeri – one of the paper’s leading reporters – says:

“There is one thing I do think that is interesting about this. It’s that if Matt Gaetz survives this, and say he does stay in office, he could be politically untouchable which would make him only more powerful if he gets through this. And I know that’s a crazy idea, but people are telling him that. I know that for a fact. If he can come out of this, he’ll probably run for president.”

So far, without any tangible evidence or accusers, the investigations on Rep. Gaetz appear petty and partisan. At this point, the accusations are as credible as the “Russian collusion hoax.”

Time will tell. If Gaetz does indeed get past this, he could indeed emerge as one of the strongest Republicans in Congress.

His close ties to President Trump already make Gaetz a popular figure in the MAGA movement. If he rides this out correctly, he could be a legit contender for the GOP presidential nomination in 2024.