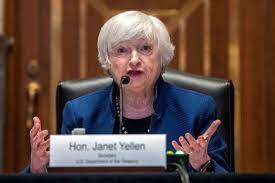 A few months ago, this wasn’t a problem. But now, former Federal Reserve Chair and current Treasury Secretary Janet Yellen says it is.

Yellen told Sara Eisen on CNBC that inflation will likely stay with the country for at least a few more months. This is after she previously said it would likely subside quickly.

“We will have several more months of rapid inflation, So I’m not saying that this is a one-month phenomenon. But I think over the medium term, we’ll see inflation decline back toward normal levels. But, of course, we have to keep a careful eye on it.”

Inflation has become the top economic issue the last few months. Prices of almost everything have noticeably gone up since Joe Biden took office. So much so that even liberals and Democrats can’t ignore this financial “elephant in the room.”

“We knew that there was a possibility that this (higher government spending) could lead to inflation…. I know it feels—I feel it. We all feel it a little bit, that everything feels a little more expensive. On top of that, gas is more expensive.”

“Everything feels more expensive because it is.”

The Federal Reserve Bank also sets interest rates for interbank lending. The Fed has said that while inflation remains a concern, it is likely “transitory.”

But some members of Congress are worried that the Fed is badly behind the inflation curve.

That’s a very good question. The U.S. economy is in unchartered waters, as the Fed and federal government have borrowed and spent trillions of dollars the last few years. History shows us time and time again that this leads to higher – and sometimes hyper – inflation.

Yellen’s recent flip-flop on this issue shows that the Biden Administration can’t ignore inflation any longer. And Team Joe is trying to maintain credibility with its economic policies.

Biden and Democrats want to spend a lot more money on infrastructure and other programs. And they don’t care about higher deficits or the rising national debt, which will soon hit $30 trillion.

Is Janet Yellen trying to understate how bad inflation could be in the U.S.? Or is this recent statement a guess on her part?

Tell us what you think in the comments section below.