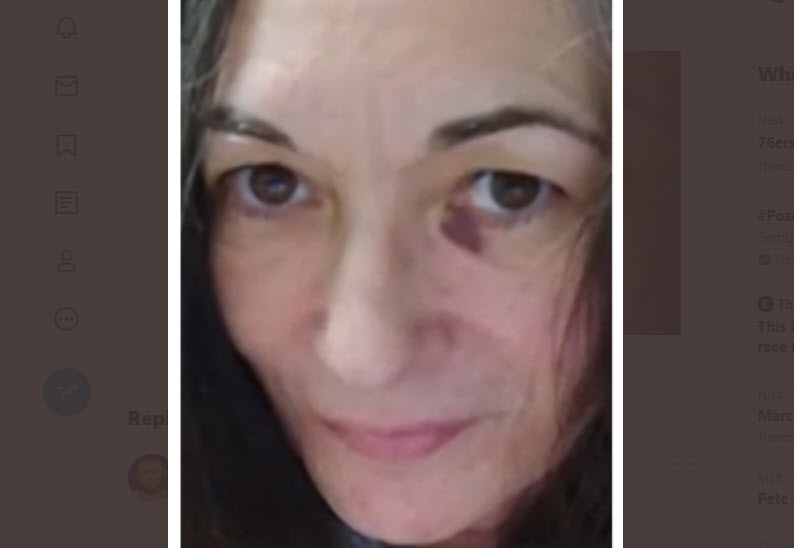 Nobody seems to know why Jeffrey Epstein’s former partner has a black eye while sitting in jail.

Not even Ghislaine Maxwell.

Or, at least that’s what she is saying.

Maxwell is currently in the Metropolitan Detention Center in Brooklyn, New York awaiting trial for multiple charges of sex trafficking and sexual abuse.

A photo of Maxwell was filed on Thursday by her attorneys and as you can see, a mysterious bruise around her left eye can bee seen.

Ghislaine’s defense lawyer said his client was unaware of the bruising until she “caught a reflection of her aching eye” in a nail clipper.

“While Ms. Maxwell is unaware of the cause of the bruise … she has grown increasingly reluctant to report information to the guards for fear of retaliation, discipline, and punitive chores. However, there is concern that the bruise may be related to the need for Ms. Maxwell to shield her eyes from the lights projected into her cell throughout the night,” Sternheim wrote, according to ABC News.

Obama-appointed U.S. District Judge for the Southern District of New York Alison Nathan ordered the government to justify the use of nightly flashlight checks in Ghislaine’s jail cell.

Ghislaine’s lawyers insist their client is not suicidal.

“She’s kept up at night every 15 minutes with lights shined in her eyes so that they can check her breathing,” argued David Markus, Ghislaine Maxwell’s appellate lawyer. “She’s not suicidal. There’s no evidence she’s suicidal. Why is the Bureau of Prisons doing this? They’re doing it because Jeffrey Epstein died on their watch.”

Her trial is scheduled to begin July 12. However, her attorneys want to push the day out further after Maxwell was recently served an 8-count superseding indictment that includes a fourth victim alleging sexual abuse.

The DOJ knew years ago that Epstein and Maxwell were trafficking girls as young as 12, but did nothing. These shocking unsealed documents show this sad reality.

What do you think about Maxwell’s black eye? Do you think she will make it to trial? Or meet a similar fate to Epstein? Share your thoughts in the comments.