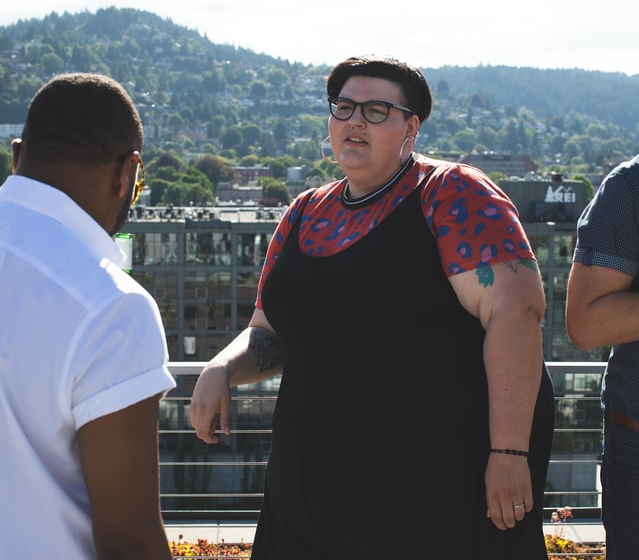 This may be the most bizarre example of political correctness that you’ve ever seen. Of course, we’ve all seen political correctness change of referring to people as “black” to “African American” and, now, to “people of color.” Then, there have been demands where you are no longer supposed to assume a person’s gender simply because they were actually born male or female, but you’re supposed to use their “preferred pronouns.”

But, now, the L.A. Times may take the cake for political correctness by using the most ludicrous linguistic gymnastics in an effort to tell people that being fat is actually bad for their health (hat tip to here for the lead).

I’m not kidding. You can see what I mean when you see what Maria L. La Ganga writes:

Chrystal Bougon cried after the needle went into her arm. Not because her first dose of the Moderna vaccine hurt. But because, finally, being fat actually paid off.

The 53-year-old was inoculated in the parking lot of Kaiser Permanente in San José on a rainy Friday in March, four days after eligibility in California was broadened to include people with underlying conditions. Among them, a body mass index of 40 or more — 233 pounds for an adult who is 5 feet 4 inches tall.

Bougon’s medical record at Kaiser shows she is morbidly obese; as an activist, she prefers the word “fat.” Her experience with medical providers has been one incident of size stigma after another, she said, like the time she went in with a scratched cornea and was told to lose weight. She fears being hospitalized with COVID-19 and unable to advocate for herself.

“For that reason I decided, you know what, I’m not going to feel guilty about [being vaccinated]. I’m going to do it,” she said. “And I’m not going to apologize for it. I’ve been in fear the whole flipping time, staying home, avoiding everybody. I couldn’t do my job. I’m an electrologist. I remove facial hair. I couldn’t come to work. I couldn’t make money.”

The virus has underscored yet another serious inequity. Studies link higher body mass index, or BMI, with increased risk for severe COVID-19, including higher rates of hospitalization. Other research shows weight bias can keep larger-bodied people from seeking and receiving appropriate care.

At the same time, the pandemic has highlighted a clash between the medical establishment and the fat acceptance movement, between those who use clinical terms such as “obesity” and “overweight” and those who proudly describe themselves as “large-bodied,” “people of size,” “fat,” and even “super fat.”

In 2013, the American Medical Assn. recognized obesity as a disease. The fat acceptance movement argues it is possible to be healthy at any size.

The debate is playing out in doctors’ offices and hospital emergency rooms with renewed intensity and raising a complicated question.

With more than 70% of adults in the United States either overweight or obese, according to the Centers for Disease Control and Prevention, who are we first?

So, wait a minute, the debate is whether we should coddle people when their lifestyle choices put them at risk for nearly every serious health issue in America instead of loving them enough to tell them the truth which is that being overweight is dangerous to your health?

In what world does that even make sense? Do you tell anyone that you love that, “Hey, go ahead and pull a gun on a cop. I’ll still love you?” No. You tell them, “Because I love you, I’m saying that you had better not pull a gun on a police officer. If you do, you could end up dead.”

In the politically correct world, apparently, not hurting someone’s feelings is considered a better thing to do than loving them enough to tell them the truth.

What do you think about the new politically correct terms “large-bodied” and “people of size?” Comment below.