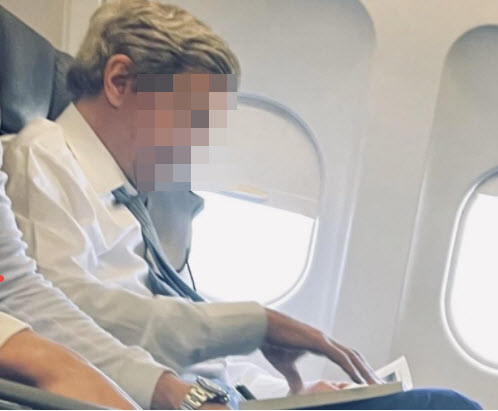 In the latest episode of the popular soap opera “As the Mask Turns,” we find former Secretary of State and Green New Deal Pusher John Kerry, sitting on an plane.

As Kerry settles into his seat with a good book, flying first class on American Airlines from Boston to Washington, someone snaps this photo:

One of the beautiful things about smart phones is how we can snap a photo of practically everything. Whoever did this, thank you.

Come on, John! This is a bunch of Mularky!

You aren’t eating. You aren’t drinking. You’re supposed to be wearing your mask, according to the CDC and your boss.

Remember what Biden said back on March 11th, John? In front of the whole nation, Joe read this from the teleprompter: “We need everyone to get vaccinated. We need everyone to keep washing their hands, stay socially distanced, and keep wearing the masks as recommended by the CDC.”

And let’s not ignore the CDC order issued January 29, okay John? Remember that Public Health Act update effective Feb. 2, John? It reads in part: “People must wear masks that cover both the mouth and nose when awaiting, boarding, traveling on, or disembarking public conveyances. People must also wear masks when entering or on the premises of a transportation hub in the United States.”

Hey, at least you aren’t wearing a scarf, ski mask, or bandana. We’ll give you credit for the proper mask choice, John. Now if you would just wear it like you’re supposed to, maybe you wouldn’t be going viral right now?

Speaking of viral, let’s take a look at the Kerry roast taking place on the Twitters:

Come on, John! Wear your d*** mask! Oh, and don’t let American Airlines off the hook either!