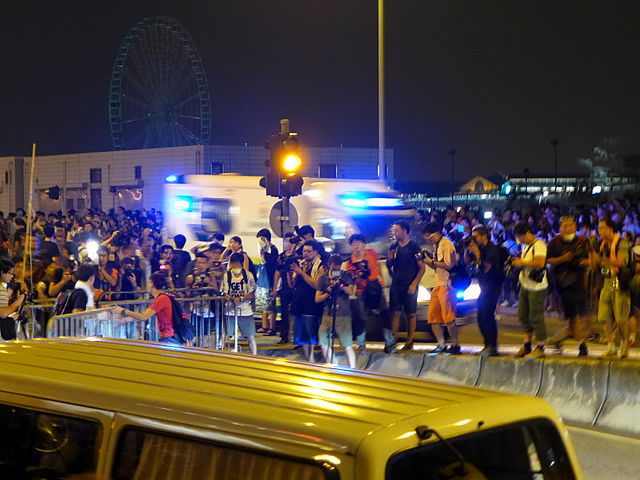 That’s what CNN tries to tell us while fires rage in the background.

This is a real chyron used by CNN last year, in case you missed it:

How can anyone believe what that network is saying?

Anyhow, the U.S. has been experiencing protests around the country for over a year now. These protests are often violent, and property damage is rampant. Looting is pretty much guaranteed to break out at this point.

Not all protestors are violent. Many are peaceful.

However, even the “peaceful ones” are known to do things that put others in danger.

For example, many BLM protestors like to block roads and streets, causing traffic to stop. They form human chains and refuse to move out of the way.

Sometimes, hard working people wanting to get home end up sitting in their car for hours.

But in one state, the protest tactic of blocking roads is coming to a screeching halt.

One of the provisions in the bill empowers innocent drivers who get their vehicles stopped by protestors. At best, these drivers are prevented from reaching their destination and are forced to sit and wait. At worst, some drivers get attacked by mobs.

Going forward, protestors in Florida will want to rethink their plans on road blocking:

From the Orlando Sentinel:

The law, which goes into effect immediately, grants civil legal immunity to people who drive through protesters blocking a road, which Democrats argued might have protected the white nationalist who ran over and killed counter-protester Heather Heyer during the Charlottesville tumult in 2017. It also makes blocking a highway a felony offense.

“Just think about it, you’re driving home from work, and all of a sudden, you have people out there shutting down a highway, and we worked hard to make sure that didn’t happen in Florida,” DeSantis said. “They start to do that, [then] there needs to be swift penalties.”

Wow. Governor Desantis is doing some amazing things down in Florida.

Nobody wants to run over another person. However, when protestors form human barriers in the middle of highways or other busy streets, this creates a dangerous environment for all involved.

And we have seen too many innocent drivers being attacked while sitting in their cars. Many drivers have had to flee for their lives, as mobs try to pull them out of vehicles, throw boulders at their windshield, etc.

This bill is like a conceal-carry law – it will make people think twice about putting drivers (and themselves) in danger.

Have you noticed you rarely hear about protests happening in the Sunshine State?

You hear virtually no violent, destructive types of protests coming out of Florida like so many liberal states deal with on a regular basis because of their continuous capitulations to the woke mob.

Florida is setting the example on how to deal with Marxist revolutionaries. Taking action is required. This includes passing tougher laws while fostering the constitutional freedoms that Americans have a God-given right to enjoy.