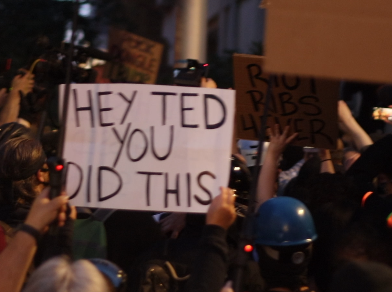 This past year, possibly the biggest flip-flop in U.S. political history occurred in Portland, Oregon.

Less than a year ago, Portland Mayor Ted Wheeler supported Antifa and their riots.

Wheeler was a leading advocate for defunding the police back in the summer of 2020.

Wheeler has reached his breaking point as Antifa is STILL rioting in Portland almost one year later.

You won’t hear Wheeler talk about supporting protestors anymore. You don’t see him standing in solidarity with Antifa.

As the warming weather signals the arrival of “riot season,” Wheeler is desperate for help from the people of Portland.

The Mayor now wants residents to call the police if you spot people dressed in black preparing to protest.

This is the first time Wheeler has asked residents for help.

What a political turnaround.