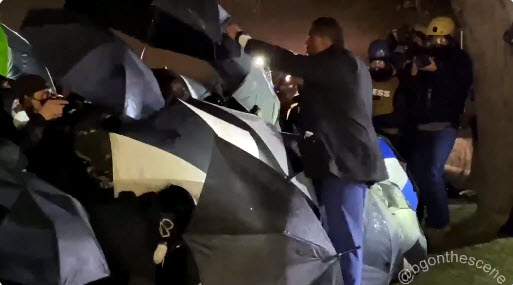 Antifa likes to use umbrellas when they protest for a couple of reasons.

One reason is because the umbrella protects Antifa protestors from police pepper sprays.

The second reason is to use the umbrella as a cover, to hide the protestor’s identity.

Based on the number of umbrellas seen in this video, one could conclude that Antifa has joined in on the protests taking place in Minneapolis.

But this is no ordinary video…

A lone male can be seen confronting a large contingent of umbrella wielding protestors.

This video was captured by independent journalist Brendan Gutenschwager, who is covering the protests in Brooklyn Center, Minnesota, where protests have raged since a police officer fatally shot Daunte Wright over the weekend.

In the video, we don’t know why this man is angry or why he is “going off” on these leftwing militants. Perhaps the umbrellas are a dead giveaway? Maybe this guy knows that protestors holding umbrellas like this typically engage in violence and property damage?

Whatever his motivations, you gotta love his moxie.