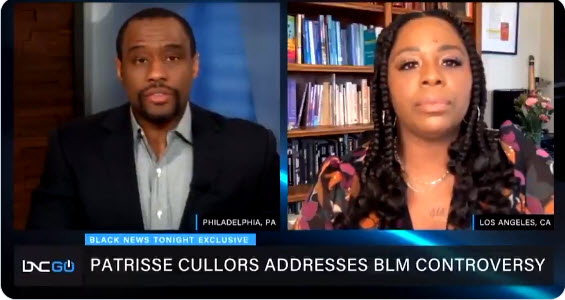 Black Lives Matter used to have a page on their website titled “What We Believe.”

That page was taken down last year when the news exploded about what was on that page.

Not everything on that former web page was related to police brutality.

One of the goals revealed on that now scrubbed page stated BLM wants to disrupt America’s “western-prescribed nuclear family structure.”

The Wayback Machine has archived this page. See for yourself.

We disrupt the Western-prescribed nuclear family structure requirement by supporting each other as extended families and “villages” that collectively care for one another, especially our children, to the degree that mothers, parents, and children are comfortable.

Ms. Cullors appears to be a special kind of Marxist – one that believes in private property.

“We actually do have an ideological frame[work],” Cullors said of her organization. “We are trained Marxists. We are super-versed on, sort of, ideological theories.” – Patrisse Cullors, BLM co-founder

Not only did Cullors call herself a trained Marxist on that infamous video from 2015, she also doubled down on a video just four months ago called “Am I a Marxist?”, where she says she “believes in Marxism.”

So how does a Marxist justify owning four multi million dollar homes?

Now that Cullors has been exposed as a situational Marxist, and not someone truly committed to “the cause,” what does she have to say about the fact that she owns FOUR extravagant homes that were paid for through her work with BLM?

Try not to laugh too hard when you hear her answer.

In this interview with Marc Lamont Hill, Cullors explains how her extravagant lifestyle is not about her – it’s all about family.

So the Marxist who wants to dismantle the traditional family now suddenly cares about her own family. Marxists put the State before their own family, normally.

Cullors is either confused on what a Marxist is or she’s a hypocrite, trying to talk her way out of this glaring contradiction in her philosophy. She’s not doing a good job explaining herself.

The comments responding to her explanation are brutal. And these commenters appear to be coming from the Left, not the Rigth:

Tell us what you think below.