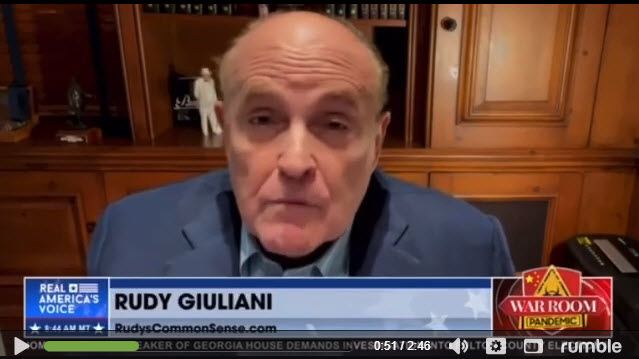 America’s Mayor says the results show clear evidence of voter fraud, including hundreds of thousands of fake ballots. Giuliani also says the number of phone ballots used in Georgia and Pennsylvania will blow our mind.

Steve Bannon: Mike Pence has flatlined his political career. You stood tall in the breach. Tell us, given where we started, where we are today with this now exploding all over the country, how do you think we’re doing and where do you think this heads?

Rudy Giuliani: Well, I think Arizona is going to be, you can’t really dispute it, the numbers and the categories are sufficient to really change the election. I mean we’re talking about at least 200,000, it’s probably going to be more, illegal votes, clearly illegal. You got 60,000 or 70,000 that we always thought were there, pieces of paper, that are not official paper. That’s going to be true in Georgia. That’s going to be true big-time in Pennsylvania.