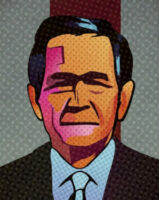 George W. Bush was a controversial President in many ways. Democrats hated him because… well… he was not a Democrat. But many Republicans took issue with Bush-era policies such as the Patriot Act and its invasion of Americans’ privacy.

Now, Bush said something that will, no doubt, get him lots of positive publicity. At least from the leftist mainstream media. Tom Ozimek writes,

Former President George W. Bush waded into the controversy around the “America First Caucus” initiative, saying in a recent interview that if the Republican Party stands for “exclusivity” and “white Anglo-Saxon Protestantism,” then it will be rejected by voters.

Bush was asked in an interview on The Dispatch Podcast last week about leaked plans for the caucus that referenced “Anglo-Saxon political traditions,” with the former president saying that, “if the Republican Party stands for exclusivity, you know, used to be country clubs, now evidently it’s white Anglo-Saxon Protestantism, then it’s not going to win anything.”

Bush’s remarks also come after a document outlining the “America First Caucus” was published by a media outlet in mid-April, drawing criticism from Democrats and Republicans for phrases such as, “America is a nation with a border, and a culture, strengthened by a common respect for uniquely Anglo-Saxon political traditions.”

The document also said legal immigration should be limited to people who “have demonstrated respect for this nation’s culture and rule of law” while arguing that, “America’s borders must be defended, and illegal immigration must be stopped without exception.”

You have to wonder why a former Republican President of the United States is being so dense. If people are immigrating to the U.S., those people are looking for the type of life that the unique culture of the U.S. provide. That unique culture comes from an emphasis on rule of law, personal initiative and character, and on a culture that borrows heavily from the moral teachings of Christianity.

Choosing to live within those unique cultural characteristics do not mean that an immigrant needs to necessarily dress in typical clothing or eat typical food from the U.S. It doesn’t mean that any immigrant needs to convert to Christianity. It does mean, though, choosing to live by the values that allowed the United States and other western nations to become economic powerhouses in the world and beacons of freedom.

If you came from another country that isn’t prospering and stifles your freedom, why would you bring that culture that limits prosperity and freedom to the country that has the prosperity that you want to have, too?

To be fair to Bush, though, the mainstream media is going to this intentionally dense, too, in how they will spin America First political stances to call them racist.

The solution? Educate the people that you know about the truth noted above, and you need to vote. Because the last thing that we need in America is more of the chaos that leftists have brought to the U.S. over the last few years with their fundamentally anti-western values of lying, laziness, and socialism.