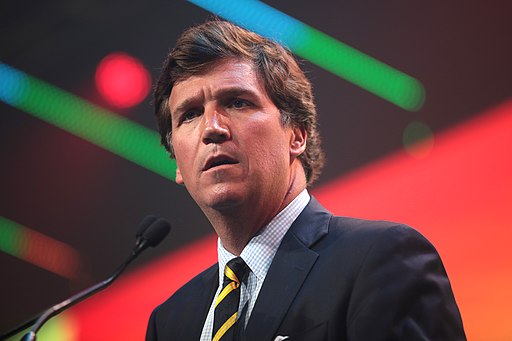 Saying this out loud is so surreal: “A U.S. Marine Corp Twitter account was used to attack a conservative American journalist.”

Never did expect to type that sentence in my lifetime, but there it is.

So, now we have a situation where the normally tight bond between conservative patriots and the military is awkwardly strained.

All because the Biden led DOD publicly went after Tucker Carlson of Fox News.

This really did happen. The fallout and future implications are troubling.

Okay, so what did the U.S. Military do that has conservatives upset?

Last week on his show, Carlson criticized Biden’s announcement that the U.S. military would begin offering maternity uniforms for women, including Air Force pilots, as well as update their hair regulations. Carlson called this “a mockery of the U.S. military.

This soon prompted several military units and officials on Twitter to respond to Carlson. The most newsworthy tweet came from the II Marine Expeditionary Force. Buzz America was not able to obtain a photo of the now deleted tweet. The tweet showed a photo of a woman carrying a man during a drill. The tweet said:

What it looks like in today’s armed forces @TuckerCarlson

Get right before you get left, boomer

The tweet was indeed deleted from the account. An apology was also tweeted, but has apparently been deleted. It said:

Interestingly, another controversial tweet from the military critical of Carlson is still up on Twitter. The gentleman speaking is apparently the leader of President Trump’s recently formed “U.S. Space Command.” He does not reveal his name, but the tweet is still on the U.S. Space Command, Command Senior Enlisted Leader Twitter account. He calls out Tucker Carlson, points out his lack of military service, and criticizes cable news, what he calls “drama t.v.”

The next day, the gentleman tweeted this follow up video that was not an apology, but he does acknowledge Carlson’s right to free speech, to have his own opinion, and he says he opposes censorship, which is good, right?

Some “big guns” are coming to defended Carlson – most notably Senator Ted Cruz of Texas:

Here is a copy of the “blistering” letter Senator Cruz sent to the USMC, where he demands to meet with the Commandant to “put a stop to it.” “It” being the military’s public attacks on journalists.

No word yet on a response to Cruz from Defense Secretary Lloyd Austin. We will let you know as this story plays out.

In closing, take a look at what this woman Marine veteran who now works in Congress has to say on this issue: