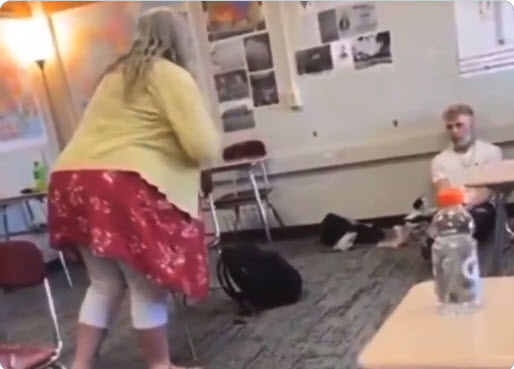 A public school teacher was recorded berating a student inside a classroom at Poynette High School in Poynette Wisconsin on Tuesday.

The teacher loses her temper and yells demeaning comments and name calls one of her students who is sitting on the floor with their back against the wall.

Why, you might ask? Because he’s not wearing a mask.

When the student points out he’s vaccinated, this only seems to enrage this teacher more.

The rotund teacher towers over the boy and spews out a barrage of negativity at the young man, who remains calm the entire time. Most of his verbal responses consist of “okay.”

This public school teacher, on the other hand, verbally abuses the student – six feet away, of course:

“I don’t care if you’re vaccinated you little dink,” the belligerent teacher says during the exchange. “I don’t want to get sick and die. There are other people you can infect. Just because you’re vaccinated.”

“You know what? You’re not a special person around here. You should hear how everybody talks about you around here. YOU’RE A JERK!”

“You’re a jerk,” she repeats. “You need to have respect for other people in your life.”

“You’re not a big man on campus,” she says right before the video cuts off.

What an embarrassing moment for public schools everywhere.

Here are some of the best Twitter comments reacting to this crazy video: