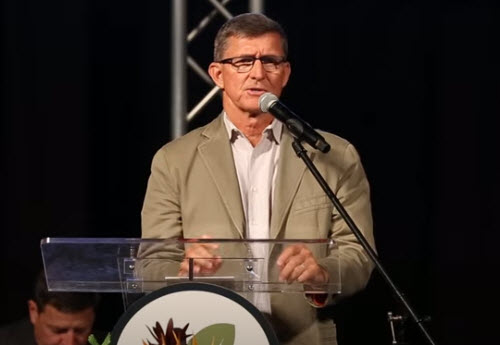 In this recent speech, Flynn describes how the American people ran to him and his family and embraced them. During those ugly days of persecution from the Democrats, patriots supported him fiercely.

Although he hasn’t said this publicly, my guess is Flynn’s gratefulness for those who supported him is why he has been doing so many talks lately.

He wants to give back to conservatives like you.

Whether he’s responding to internet rumors, or giving a nod of approval while calling the WWG1WGA slogan a “great phrase” like he did here, you don’t want to miss this latest talk from General Flynn.

This is General Flynn speaking at an “America’s Future” event hosted by a religious group called Regeneration Nashville.

He talks a lot about destiny – both your personal destiny and our nation’s destiny.

He also urges us to study a particular revolutionary war battle.

Here is Flynn’s entire talk. Be sure to watch the best part at the end when the host asks Flynn about Guantanamo.