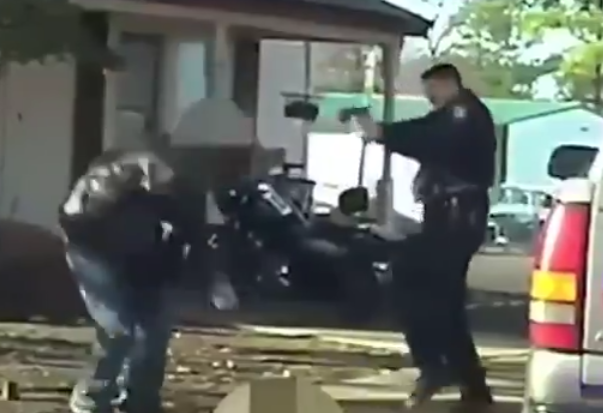 Leftist hate people. They do. They try to separate and categorize people into groups and treat people as faceless members of groups without any individuality at all. They dehumanize and demean people as if some groups are less than human.

Or “You’re a cop, so you’re evil and cruel.” There is no or in that accusation. The left just thinks that all law enforcement officers (unless we’re talking about members of the FBI working for the left) are out to intentionally hurt people.

And while there are certainly a few bad apples that need to be removed from law enforcement jobs (there are a few bad apples in any large group of people), this characterization simply isn’t true about the overwhelming majority of police officers, and it shows the left’s complete ignorance of what it takes to be a cop.

But a recent tweet has video showing a different side of that issue (hat tip to here for the lead).

Forewarning: someone gets shot.

Did you watch the video? Did you see how fast that happened? Do you realistically think that police officer had time to shoot that guy in the leg to prevent being assaulted or killed?

If you answered “Yes” to either of the last two questions, you need to watch the video again, and, in your mind, put yourself in that police officer’s place. The officer did what he needed to do to prevent getting shot. There was no time to aim anywhere but center of mass (at the torso).

So, the next time that you hear the left criticizing law enforcement for being intentionally violent, show them this video and advise those leftists to actually imagine what it would be like to be in that police officer’s place. If that leftist has the ability to be honest, they’ll have no choice but to change their mind about police officers.