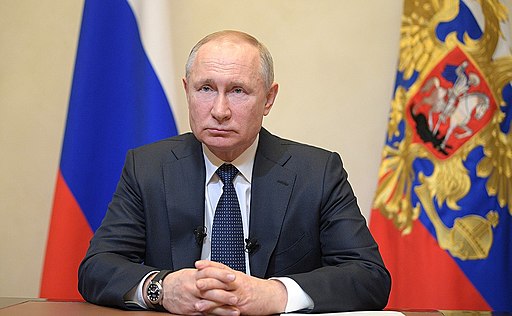 The weak leadership of Joe Biden and company is causing many American adversaries to saber rattle and throw shade at the once mighty U.S.

One of America’s biggest foes is Russian President Vladimir Putin.

On Wednesday, Putin said some mean and nasty things about the U.S. Funny, I haven’t heard the Left complain like they did whenever Trump said something mean.

Anyhow, the Russian President ridiculed and threatened the U.S. during a televised Q&A. He said America’s world dominance is “over” and he threatened retaliation if any “boundaries are crossed.”

A British navy battleship HMS Defender recently passed through the Crimean sea near Russia’s shores. Here’s what Putin had to say:

Putin boldly claimed his navy could have attacked the ship in the Black Sea because the West knows “full well that they can’t win in that war”.

During his annual “Direct Line” call in show, in which citizens can submit queries for the president, he spoke of how the “period of unipolar world is over”.

“No matter what sanctions are imposed on Russia, no matter what the scaremongering, Russia is developing and in some respects our country has surpassed the European countries and even the US,” he said.

While Putin said the nation would not be taking steps that would be harmful to themselves, he said if boundaries were crossed, they would find “asymmetrical ways” to respond.

“I hope the United States will change this attitude not only towards us, but also towards their other allies,” he said.

Putin went on to say that the world was “changing dramatically” – something he said the United States understood.

“On the other hand,at all costs,they are trying to maintain their monopoly position. Hence their threats and sanctions come out.”

This is Putin‘s starkest warning yet to UK and the US following last week’s skirmish in the Black Sea.

Moscow said one of its warships fired warning shots and a warplane dropped bombs in the path of British destroyer HMS Defender last Wednesday to force her out of an area near the Crimean Peninsula, which Russia annexed in 2014.

Britain denied that account, insisting its ship wasn’t fired upon and said it was sailing in Ukrainian waters.

The Kremlin strongman said during a TV Q&A today: “This was a provocation, of course.

The Putin made this jaw dropping statement:

Sleepy Joe Biden is not intimidating anyone, and his leadership is making the nation a mockery on the world stage. His meeting with Putin doesn’t appear to have made much of an impression on the Russian leader, as Putin is already mocking the U.S. – something he didn’t do during Trump’s four years as commander-in-chief.