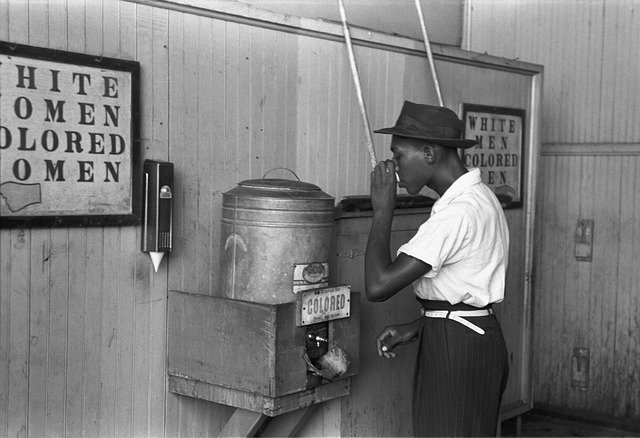 You thought segregation ended with the Civil Rights movement? Nope! Welcome to 2021, where segregation is being revived in a frightening new form.

This time, segregation won’t be based on skin color, but rather what you have or haven’t had injected into your body. See for yourself…

Vaccinated fans will soon have their own sections at Miami Heat games.

The Heat announced plans Tuesday to open two sections in their lower bowl only for fully vaccinated fans starting with an April 1 game against Golden State. They are the first NBA team to reveal such a plan, though other clubs are believed to be working on similar measures.

Masks will still be required, even for the vaccinated fans, but social distancing rules will be slightly relaxed in those areas.

The Heat are devoting two sections for the fully vaccinated fans, where pods of groups will be separated by just one seat. Those fans will be admitted through a separate gate and required to show their Centers for Disease Control vaccination card, or proof thereof, along with valid identification. Fans would have to have been fully vaccinated for at least 14 days to be eligible to be in those sections.

By NBA rules for the vaccinated-only sections, children not yet eligible to receive the vaccine would not be permitted even if with parents or guardians who have been vaccinated. Teams are also being encouraged to have dedicated concession and restroom areas for the vaccinated fans, and make efforts to limit any chance for those fans to commingle with others inside the arena.

Essentially, there will be two classes of people: the privileged vaccinated people and the unvaccinated who will be treated as “less than” — almost like the untouchables in India.

What’s sad about all this is how blind people seem to be to it. For example, Heat coach Erik Spoelstra described these new developments as being positive: “You’re already getting a sense that things are starting to change and go in a much more positive direction.”

Frankly, it’s not positive at all. It will create more division, more “Us vs. Them” thinking. Not only that, segregation based on vaccination records could be a precursor to some sort of “health pass” — an official document you will have to present to gain entry to any public place.

I’m concerned that these new “vaccine privileges” are being implemented in Florida, a state that has stood up for freedom more than other states. If Florida permits the NBA to implement segregation, then similar forms of segregation can happen anywhere.

Best case: Florida and other states prohibit such segregation through the passage of laws. (MARCH 30 UPDATE: Florida is now doing this!)

Worst case: Individuals will have to vote with their dollars and refuse to support organizations and businesses that try to impose segegration inside their establishments. For organizations like the NBA, this means not watching their games on TV either.

What do you think about segregation based on your vaccination record? Leave a comment below and let me know what you think.