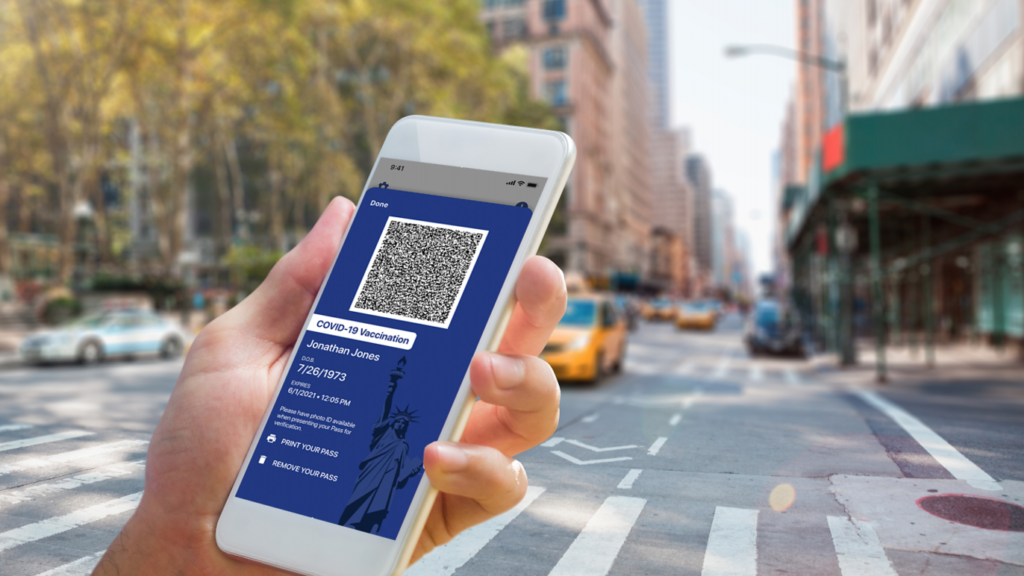 Just last year, the idea of vaccine passports was being derided as a conspiracy theory. Today, they’re becoming reality. In fact, New York is launching the nation’s first vaccine passport on April 2, 2021. It’s called the Excelsior Pass (pictured above).

So how did we get here?

As recently as May 2020, people were labeled as “conspiracy theorists” for suggesting that the coronavirus vaccine might be made mandatory. But Ken Jebsen, a former radio presenter, nailed it when he suggested last May that “vaccine obligation will be introduced ‘through the back door.'”

We haven’t yet gotten to the point where the coronavirus vaccine is literally being forced on people. But a vaccine passport is a kind of de facto forced vaccination as it deprives you of the basic human right to move and travel — unless you get a shot and carry a record of it.

The vaccine passport now being introduced is the “back door” to vaccine obligation. Yes, The Powers That Be are giving you a “choice,” but it’s a choice designed to force you into compliance.

One is reminded of the gold stars Jews were forced to wear in Germany during the Third Reich. Except this time, one must have a “gold star” vaccine passport to have freedom of movement. Without this “gold star,” you will be singled out as inferior and “less than” those who’ve complied with the government’s demands.

Conservatives have almost universally criticized the idea of vaccine passports as being wrong, tyrannical, even insane. Here are a few examples…

While New York rolls out its Excelsior Pass, Florida is going in a totally different direction.

Furthermore, DeSantis is taking immediate action to make sure that vaccine passports are NEVER required in his state.

Florida businesses soon won’t be able to screen customers based on whether they’ve received the COVID-19 vaccine, Gov. Ron DeSantis said Monday, even as he signed a bill designed to shield companies from pandemic-related lawsuits.

“It’s completely unacceptable,” DeSantis said of what he called “vaccination passports,” a card or some other method of proving an individual has been inoculated against the virus. “You want to go to a movie theater, should you have to show that? No. You want to go to a game, a theme park? No. So we’re not supportive of that.”

“You’re going to do this and what, give all this information to some big corporation? You want the fox to guard the hen house? I mean give me a break,” the governor said. “I think this is something that has huge privacy implications. It is not necessary to do.”

DeSantis said an executive order was coming soon, possibly by Tuesday, against vaccination passports, and he called for the Legislature to pass a bill making a ban permanent.

“We don’t want to be in a situation where people are scared of being sued just for doing normal things,” DeSantis said of the new liability law, which takes effect immediately. “We worked very early on to look at to see ways that we could provide some certainty for both businesses and health care providers. This was obviously a top priority for many of us up here. And I think that the Legislature has been able to deliver today.”

As I wrote on March 5, 2021, we need “some sort of law that says a business cannot deny service to a person who chooses not to wear a mask.” We also need laws like those DeSantis is signing… laws that protect businesses from COVID-19 liability, plus laws that ban vaccine passports.

This must happen to prevent medical tyranny from turning the U.S. into an apartheid nation. Until such time as other states follow Florida’s lead, I’ll echo Anna Khait’s sentiment…

So, what do YOU think about vaccine passports? Will you use one to travel? Or will you resist? Leave a comment below.

Florida Governor Ron DeSantis has issued an Executive Order banning the use of vaccine passports in his state.