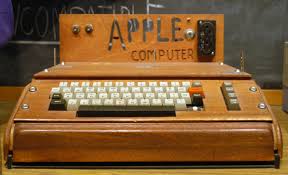 Apple or PC, that is the question. There have been entire marketing campaigns built around the rivalry, but let us be diplomatic here and say both kinds of computers have their uses.
No matter which can you’re in, though, it’d be hard to deny that Apple computers have shaped the way we think about personal computers in significant ways. Many of such basic things as a graphical user interface were popularized – if not necessarily invented – by Apple.
It’s no wonder then, that Apple has built the kind of cult following that the company still has. Many of its early machines are masterpieces of popularly available computer technology of their time.
But these are old, old computers and exceedingly rare. If you happen to collect for whatever reason, finding one can be hard – and best not to talk about whether the thing will be in working condition.
Now, though, RR Auction has available a thing so rare you wouldn’t even think it exists. We’re talking about the original, the one and only Apple I computer, and you can make a bid to buy it.
Or you can try, if you have $50,000 lying around that you don’t need. And that’s just the starting price, so you’ll probably have to dig a lot deeper.
For example, in 2019, another Apple I unit sold for $470,000. But there’s a good reason why this one might go for even more.
That’s a bit of a mark-up from the original price of $666.66. KEEP READING