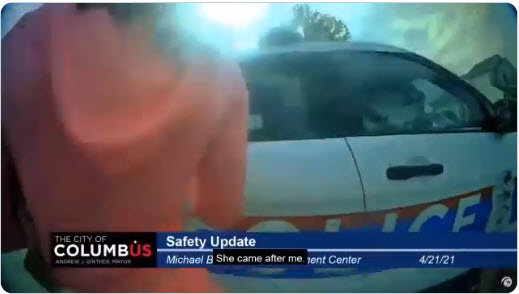 While Democrats and radical leftists rail against the Columbus police officer who shot 16-year-old Ma’Khia Bryant, another key person involved in the incident is getting overlooked.

The fact she is seen wearing a pink outfit is all we know about the woman who was in the altercation with Bryant. We don’t know her identity at this point.

“A Black teenage girl named Ma’Khia Bryant was killed because a police officer immediately decided to shoot her multiple times in order to break up a knife fight. Demand accountability.  Fight for justice. #BlackLivesMatter,” former Obama official Valerie Jarrett said in a tweet that she still has not deleted.

Many other woke blue checkmarks espoused a similar narrative, including Lebron James.

Meanwhile, the intended victim, known as “the girl in pink”, sounds relieved and grateful within seconds after the officer saved her life. On this police bodycam video you can hear “girl in pink” say:

“She f**king came at me with a knife,” the intended victim said. The officer then asked her, “She came at you with a knife earlier?” “No, she just did,” the girl said. “That is why, that’s why the police did it. She came after me.” “With a knife?” the officer said. “Yeah, so he got her,” the girl said, apparently grateful that her life was saved.

Celebrities like Jarrett and Lebron are not asking how the “girl in pink” is doing – they don’t seem to care that her life was spared thanks to the swift actions of one Columbus police officer.

As you can see in this NY Post report that includes the 911 call and additional bodycam footage, Bryant was clearly fighting with the girl in pink, pulls a knife out and lunges at the girl in pink right before the officer shot her.

Yes, what happened is tragic. However, more context needs to be applied to this situation than the usual social justice narrative that is oftentimes incomplete.

Was Bryant a victim here? Share you thoughts in the comments.