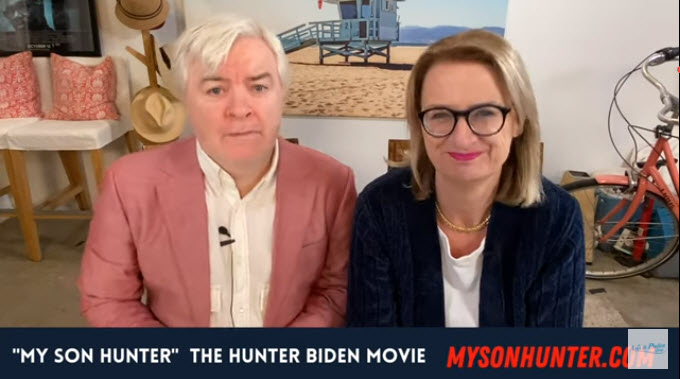 The mainstream media along with Big Tech did their best to suppress the corrupt business deals, crack smoking, and prostitution hookups found on Hunter’s hard drive before the Nov. 3rd election.

Twitter went so far as to ban the New York Post’s reporting on this story from their platform. No one could share a link to the NY Post articles covering what was found on Hunter’s laptop. Doing so risked having your Twitter account shut down.

Now, two brave filmmakers are ready to bring the truth to the masses (once again) in an unbiased, entertaining, no-holds-barred movie called My Son Hunter.

Producers Phelim McAleer and Ann McElhinney have done this sort of thing before. They were both behind the eye opening film Gosnell: The Trial of America’s Biggest Serial Killer – a movie that awakened many to the horrors of the abortion industry.

The husband-and-wife dynamic duo also made the documentary Obamagate: The Movie – a film that exposed the ‘Russian collusion hoax.’

A press release describes the film as a feature focusing on Hunter Biden, Joe’s son, detailing his “wild life and dodgy business dealings.”

As filming is set to begin in Serbia this summer, please consider donating to this project, as most Hollywood movie studios would never consider making this important movie. The project deserves help and Buzz America wants to help them reach their crowdfunding goal of $2.5 million in under 8 weeks.

The media and big tech covered up the bombshell report by The New York Post that showed the depth of corruption in the Biden family,” McAleer said in a statement. “The truth deserves to be told and it needs to be seen by as many people as possible. An entertaining and enjoyable movie is the best way to tell the story of the Biden family’s corruption and to ensure as many people are educated about this as possible. If the media won’t do their jobs, we’ll do it for them.”

McElhinney added, “This is an incredibly fascinating story. It’s ‘Austin Powers’ meets ‘King Lear’ with a dash of ‘House of Cards.’ The story is so compelling that viewers on both sides of the aisle will find it incredibly entertaining.”

Let us know in the comments what you think about this film project.