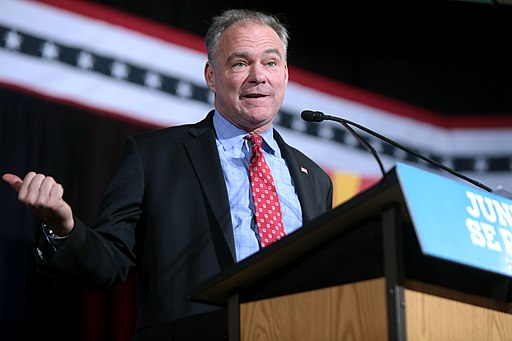 When Joe Biden decided to bomb the middle east last week, Kamala Harris was not the only one he pissed off. A whole bunch of Senators on both sides of the aisle were also angry and worried.

So in a rare showing of bipartisanship, the Senate decided to do something to prevent further escalation of tensions between the U.S. and Iran: Democratic Senator Tim Kaine of Virginia and Republican Senator Todd Young of Indiana introduced bipartisan legislation to repeal executive branch authorizations for the use of military force in the middle east. These authorizations have been in place for decades.

Congress is ticked off that Biden did not first get congressional approval to launch airstrikes into Syria.

Back in 1991 in reaction to the Gulf War, and in 2002 in response to the 9/11 attack, Congress authorized the current war powers that Presidents have used ever since.

Dems and the GOP are tired of the “forever wars” in the middle east and now want to take back those powers the President was given 30 years ago.

Constitutional scholars have debated these war powers from the beginning. Strict constitutionalists point out that Congress gave away their authority to declare war, and Presidents from both parties use the outdated authorizations for their own agenda. With al Qaeda and the Taliban now in the rear-view mirror, many in Congress think it’s time to go back to what the Founders set up constitutionally.

“Last week’s airstrikes in Syria show that the executive branch, regardless of party, will continue to stretch its war powers,” Kaine said. “Congress has a responsibility to not only vote to authorize new military action, but to repeal old authorizations that are no longer necessary.”

This is not the first time Kaine and Young have worked together on this issue. They are hoping that this latest constitutional breech by a new President will fuel a new push to restore Congress’s role as the intended leader in matters of war.

“Congress has been operating on autopilot when it comes to our essential duties to authorize the use of military force,” Young said. “The fact that authorities for both of these wars are still law today is illustrative of the bipartisan failure of Congress to perform its constitutionally-mandated oversight role.”

So far, these are the Senators who signed onto the bill (notice the wide spectrum of ideology):

Other members of Congress and various leaders are showing support on Twitter:

Senator Paul agrees that the Executive Branch needs its War Powers reigned in substantially. However, he has introduced his own bill, co-sponsored by Democratic Senator Ron Wyden of Oregon.