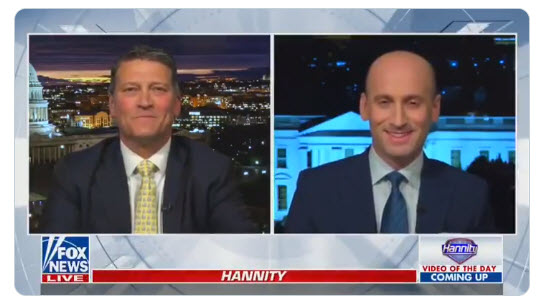 A prominent doctor with close ties to the White House is ringing alarm bells that something is not right with Joe Biden.

His cognitive decline is getting sadder and sadder. Watch this snippet from the recent town hall with CNN’s Don Lemon:

What makes Biden’s performance so troubling is the fact he prepped beforehand for the town hall. What you are watching is a rehearsed, prepared Joe Biden there.

This is worrisome for U.S. national security.

On Thursday during a Fox News interview, Jackson stated he believes President Biden will be forced to resign or face the 25th Amendment over his physical and mental fitness while in office.

Dr. Jackson is now a Texas Representative (13th District), and has been publicly questioning Biden’s mental acuity for some time now.

And I’ve been saying that it’s only going to get worse, and guess what? We’re watching that happen right before our eyes right now,” Jackson said.

“And I’m at the point right now where, you know, I went from, you know, telling people, we should be concerned about what might potentially be going on, to now saying, hey, what is happening right now?”

“Where are the people in our academic medicine that were out there calling for President Trump to have a cognitive test? Where are these people?” Jackson continued.

Jackson posted his Fox News segment on Twitter and wrote this in the caption: ““Something’s SERIOUSLY wrong with Biden – and it’s only going to get WORSE! It’s past the point of embarrassment. He’s lost. He’s confused. He can barely put a coherent sentence together. He MUST have a cognitive exam and release the results!”

How much longer can the White House keep this charade going?