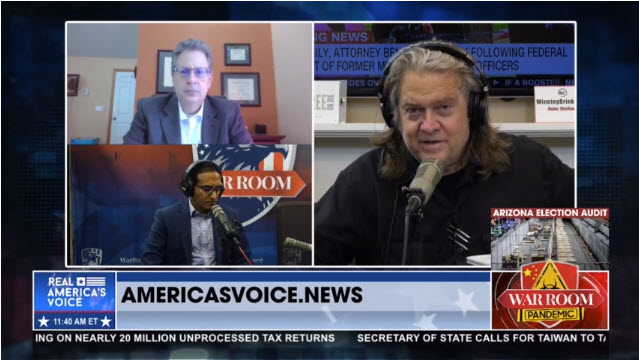 Recent evidence of voter fraud has been found in Wisconsin and Maricopa County, Arizona.

Thanks to the hard work of Steve Bannon and his team over on the War Room podcast, Americans can follow the latest developments on the growing evidence of fraud:

“We discovered 1,061 votes that were counted in this election that do not appear in the actual voter rolls in the state,” he told War Room, Saturday. “Near 100 percent voter turnout of people ages 65 – 80. We also saw a huge percentage of mail-in ballots mailed to P.O. boxes.”

DePerno also told War Room who he gets most resistance from in fighting for election integrity: the Republicans.

“Actually we get more resistance from the Republicans in the state of Michigan,” he said. :Three in senate, Majority Leader Mike Shirkey, Ed McBroom and Sen. [John] Bizon are our biggest opponents in this. We believe it is because they were part of the group that appropriated the money to purchase the machines in 2017 and don’t have the courage to stand up and acknowledge that they did something wrong.”

“And I’ve been told by them that having Joe Biden in office right now will help them win reelection in 2022,” DePerno said.

Here is the full episode for those wanting more: